Impulses are always subdivided into a set of 5 lower-degree waves, alternating again between motive and corrective character, so that waves 1, 3, and 5 are impulses, and waves 2 and 4 are smaller retraces (corrections) of waves 1 and 3 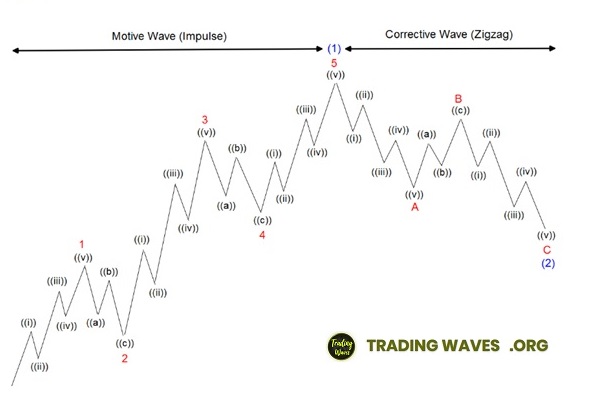 In a bull market the dominant trend is upwards (five waves up and three down) and, conversely, in a bear market the dominant trend is downward, so the pattern is reversed—five waves down and three up.
Elliott Wave degree is an Elliott Wave language to identify cycles so that analyst can identify position of a wave within overall progress of the market: 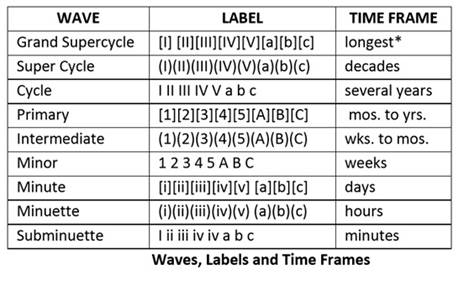 • Wave 4 cannot overlap with the price territory of wave 1

• Wave Alternation: If Wave 2 is a deep correction Wave 4 normally will be shallow, and vice versa

• Wave 5 normally moves higher than Wave 3; otherwise it is called a Failed Wave 5

Traders can thus use these Fibonacci Ratios to determine the point of entry and profit target when entering into a trade.

In Elliott Wave Theory, the traditional definition of an Impulsive (or motive) wave is a 5 wave move in the same direction as the trend of one larger degree. There are four different variations of a 5 wave move which is considered an Impulsive wave: 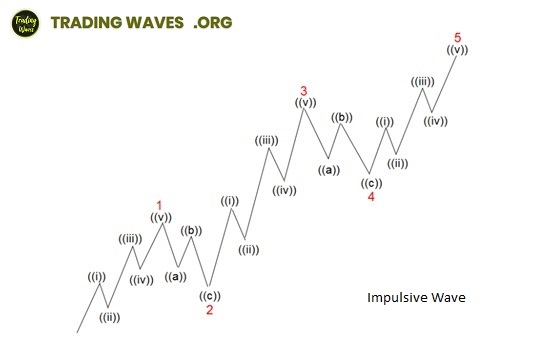 • Impulses usually have an extension in one of the motive waves (either wave 1, 3, or 5)
• Extensions are elongated impulses with exaggerated subdivisions
• Extensions frequently occur in the third wave 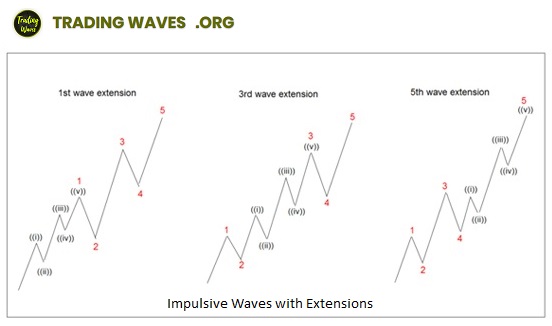 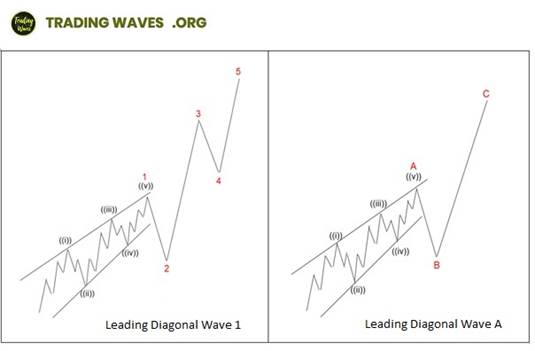 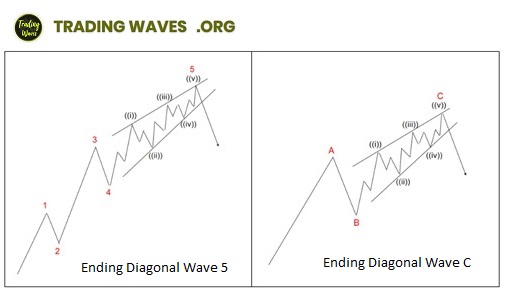 The classic definition of corrective waves is waves that move against the trend of one greater degree. Corrective waves have more variety types and are less clearly identifiable compared to impulse waves. Hence, sometimes it can be rather difficult to identify corrective patterns until they are completed.

When corrections come to an end, prices usually explode back in the direction of the larger trend.
Knowing how to differentiate a corrective wave pattern from a trend wave, will help you hold a position for longer when you are in a trend.
And it will help you enter the market at the correct time with minimised risk levels.

There are four types of corrective patterns:

• Zigzag correction subdivides into 5-3-5 internal wave pattern
• Waves A and C tend towards equality in length
• Wave B tends to retrace %38 to %50 of Wave A
• ZigZag correction usually appears in Wave 2
• ZigZag corrections will usually target the 61.8% retracement of the main trend move. 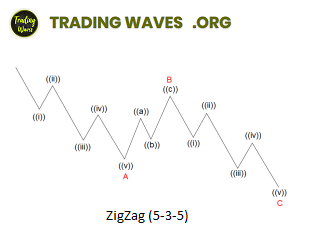 A flat correction is a 3 waves corrective move. Although the labelling is the same, flat differs from Zigzag in the subdivision of the wave A; Whereas Zigzag is a 5-3-5 structure, Flat is a 3-3-5 structure. There are three different types of Flats: Regular, Expanded (irregular), and Running Flats. 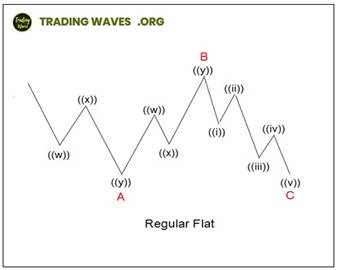 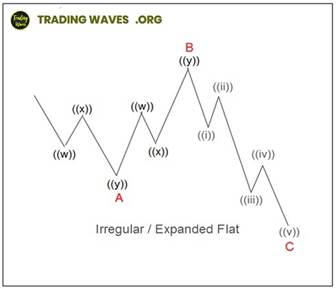 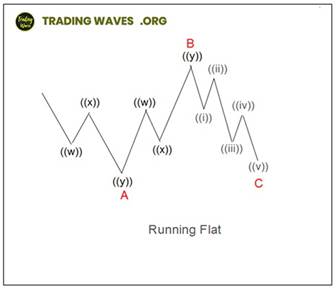 • A triangle is a sideways movement that is associated with decreasing volume and volatility
• Triangles have 5 sides and each side is subdivided in 3 waves hence forming 3-3-3-3-3 structure.
• Triangle waves usually occur in the position of Wave B or Wave 4 of the larger pattern
• Triangle waves usually occur in the penultimate move in the larger Wave pattern and leads to an explosive move back into the larger trend.
• There are 4 types of triangles in Elliott Wave Theory (as shown below): 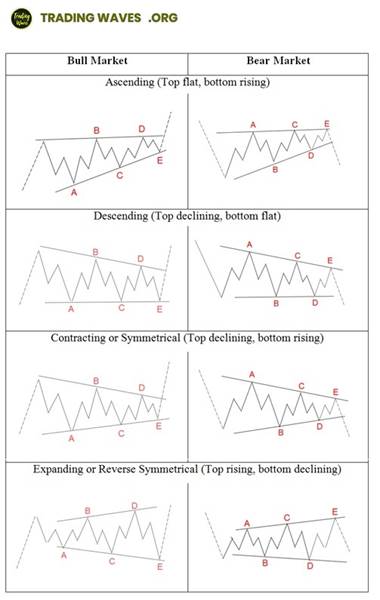 An Elliott Wave double or triple three combination happens when simpler wave forms stick together to form a larger structure.
For the most part, double threes and triple threes are horizontal in character.

- 4.4.1) Double three: A combination of two corrective patterns above 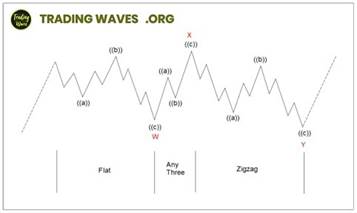 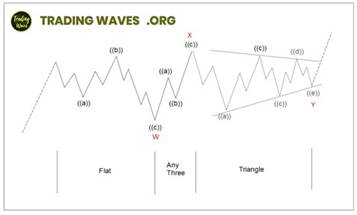 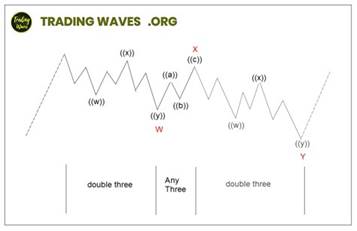 - 4..4.2) Triple three: A combination of three corrective patterns above 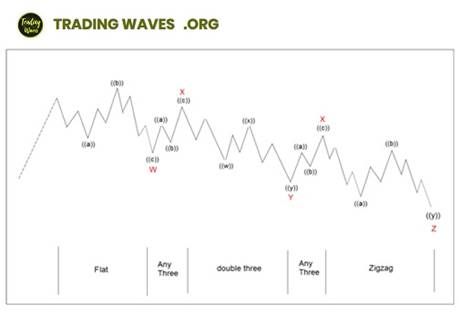 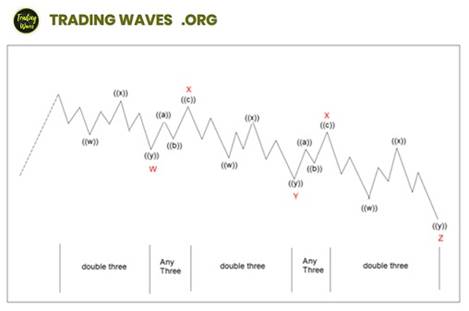